Hurricane season calls for comfort food, something to soothe us during days of relentless what-if TV coverage and weather app updates on the wind and rain of the latest named storm.

Ice cream may well be comfort food, but it requires refrigeration. Since a puddle of spumoni will comfort no one, we suggest something that needs doesn’t rely on contrived cooling: panzanella, the Italian salad of bread and raw vegetables. A no-cook dish that can be made ahead, its textures and flavors transcend its humble genesis– domestic frugality, making use of bread that, if not yet stale, had aged beyond its best self. 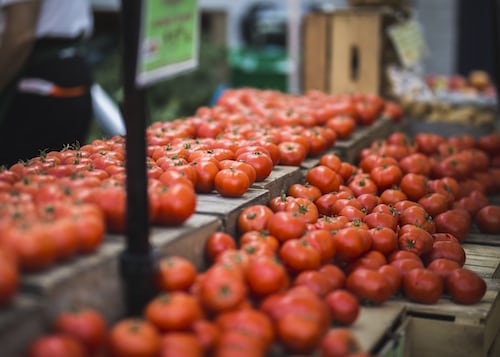 Chunks of bread absorb the juices of chopped tomatoes, cucumbers, peppers, and onion that have been dressed tossed with oil & vinegar. The salad is seasoned with salt, black pepper, and fresh herbs, usually basil and parsley. Like many Old World Italian classics, panzanella exemplifies how much can be made of very little.The whole really is greater than the sum of its parts, and a rescue dish for home gardeners.

Occuring at what is usually the peak of the home garden output, the North American hurricane season can be cruel to gardeners and late summer’s ripening produce. So, we urge you to harvest ahead of the next storm, before torrential rains do in your tomatoes,cucumbers, onions, scallions, parsley, basil,and zucchini.

Should you find yourself overwhelmed with produce,remember that panzanella is like your nonna at Sunday lunch– ever ready to welcome more guests.

In other words, your Panzanella di Tempesta, Hurricane Panzanella, has room for some ad hoc additions and garnishes. Optional produce that can be added raw to the salad’s seasoned oil & vinegar are: young zucchini, radishes, scallions, celery, tomatillos, lettuces, arugula, very young string beans, sugar-snap peas, pea tendrils, chives, mint, oregano, thyme…. Of course, if you are growing these things, you already know many other ways to show them the respect they deserve and would never let a storm claim them!

With a little forethought to stocking your Almost Italian pantry, the Panzanella Trinity of good bread, olive oil, and vinegar, can be the basis of varied meals over a few days, even if those days are without electricity. Panzanella saw this AlmostItalian.com duo through an entire week during and after Hurricane Sandy in 2012.

It goes without saying that you already have a nice red or white wine vinegar and flavorful olive oil on hand. If you read this blog, we know that.

Before the power goes out: gather bread, something better than the hot-dog rolls left over from your Labor Day cookout. Panzanella demands bread with heft; day-old or older is fine– “artisan” or sourdough, white or dark– anything but sweet. If there’s time to plan ahead, tear or cut the bread into 1-inch pieces and lightly toast them in the oven. When they are cool, store them in plastic bags. This way, they won’t go mouldy in the damp weather ahead.

Like cut flowers, your fresh herbs, flat-leaf Italian parsley, basil, mint… will stay fresh with their stems in a glass of water.

Hard-boiled eggs in their shells and cheeses like feta, ricotta salata, and mozzarella can last a few days in a cooler. But if you want additional protein, be sure to have a manual can opener handy for your tins of chickpeas, tuna, and anchovies.

Even after opening, many brined & oil-packed condiments– capers, giardiniera, roasted or pickled peppers, olives– will safely last a few days without refrigeration.

Keep your salt in a screw-top glass jar to keep it dry during the damp days ahead. Fill your pepper grinder. Have some peperoncino flakes for those who want a bit of heat. Panzanella also welcomes freshly minced garlic, but we suggest you add it only to what you plan to consume for a particular meal and no more than an hour before serving. Leftover panzanella is delicious, but garlic left in a salad too long can overpower everything else.

The ingredients you actually have on hand will guide what you make. Proportions of bread to vegetables are the cook’s choice. We use roughly one part toasted bread chunks to three parts vegetables and fresh herbs. We don’t peel or seed any of the vegetables except the onion and garlic; and we leave the crusts on our bread.

Good quality bread with some body– fresh or older

Like many Old World Italian classics, panzanella exemplifies how much can be made of very little. But if you are harvesting ahead of a serious storm, you may find yourself overwhelmed with produce. It’s good to remember that panzanella, like your nonna at Sunday lunch, is ever ready to welcome more guests–

In other words, your Panzanella di Tempesta, Hurricane Panzanella, has room for some ad hoc additions and garnishes. Optional produce that can be added raw to the salad’s seasoned oil & vinegar are: young zucchini, radishes, scallions, celery, tomatillos, lettuces, arugula, very young string beans, sugar-snap peas, pea tendrils, chives, mint, oregano, thyme…. Of course, if you are growing these things, you already know many other ways to show them the respect they deserve and would never let a storm claim them!

If you can keep these cool:
Hard boiled eggs
Cheeses such as feta, mozarella, ricotta salata

Panzanella recipes and photographs abound– in many older Italian-American cookbooks and on scores of online sites. Contrast the classic version offered by Patricia Wells and the more gilded treatment given by David Leibovitz. The mere assemblage of rustic loaves and a bowl of magenta crescents of Bermuda onion, grape tomatoes, cucumber rounds, and basil leaves glistening with oil is indeed Instagrammable. So, why wait for a hurricane? Rain or shine, gather good ingredients and your own panzanella will also be beautiful whether you make yours ahead or after a power loss, assembling it by candlelight. Click away, but keep an eye on your smartphone’s battery — in case you do need that flashlight feature.